One of the most common symptoms in concussion are symptoms of dysautonomia via the Vagus nerve. Dysautonomia is a broad term that is used to describe a condition associated with the autonomic nervous system. The most common is Postural Orthostatic Hypotension Syndrome known as P.O.T.S. Patients with P.O.T.S. experience an abnormal jump in their heart rate when elevating from a supine (lying) position in order to get blood to their brain. If this reflex doesn’t respond correctly you could experience dizziness or fainting because of decreased blood flow to the brain.

This relationship between eye and neck muscle activity influences muscle coordination and tone during functional activities, such as reading, walking, cognition and results in muscle spasms resulting in headaches all due to a sensory mismatch. 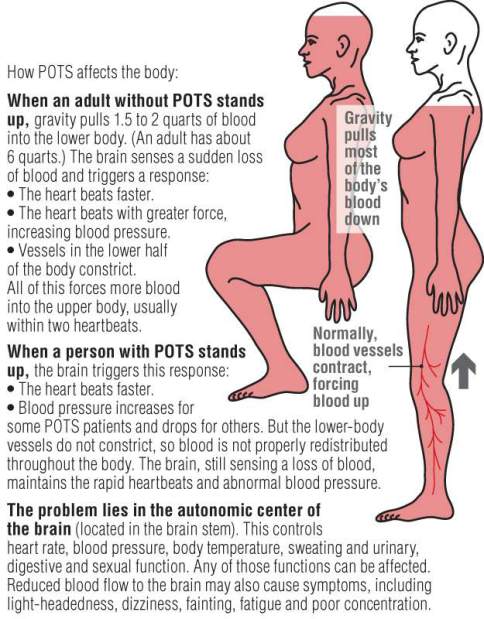 Changes in blood pressure and heart rate can be due to many things. The lack of activation or stimulation which causes changes in a cell is what leads to decreased metabolic activity in the cell. Tilt table testing signals the baroreceptor which fires into the NTS letting it know of the changes so that it can respond by firing into the sympathetic system to steadily increase heart rate and blood pressure accordingly. When a cell is sitting too close to threshold a slight stimulus comes in and the cell responds inappropriately resulting in an inappropriate response.